Morning Sickness: When Does it start?

Morning Sickness is something I worried about when I found out I was pregnant!

I was worried about morning sickness because I hate vomiting! I know no one enjoys it, but I really have a problem with it!

I would do anything to avoid it if I could!

Unfortunately, vomiting during pregnancy is common, with as many as 60%-70% of women in the U.S, according to the Americans Pregnancy Association!

As a first-time mom I wondered,

I knew I had a pretty good chance of experiencing morning sickness because my mother did with all three of her kids.

Morning Sickness: What To Expect?

What Is Morning Sickness?

Morning sickness is when you experience nausea and vomiting during pregnancy.

Don’t let the word “morning” mislead you, ladies, because it can happen at any hour of the day or night.

Why Does Morning Sickness Happen?

The cause of morning sickness is not 100% understood.

It is believed that morning sickness occurs because of the spike in pregnancy hormones in the mother’s body and blood sugar reduction.

When Does Morning Sickness Start?

Morning Sickness peaks at about 6-11 weeks of pregnancy. Some even as early as four weeks pregnant.

What Week Is Morning Sickness Worse?

Morning sickness is worst at around nine weeks, according to March of Dimes.

How Long Does Morning Sickness Last?

It can last more or less until the end of the first trimester (about week 12) or until you give birth.

When Did My Morning Sickness Start?

I started to experience morning sickness symptoms when I was seven weeks pregnant.

The first symptom I experienced was nausea. It would usually happen in the mornings and last until the afternoon on and off.

The nausea wasn’t too bad.

It was the not knowing when my nausea would turn into vomit that worried me!

When Did It Get Worst?

At about nine weeks pregnant!

This was when my sense of smell was enhanced! Making me more sensitive to smells and nauseous.

I remember I had this Glade plug-in with a scent I once liked; it then became a trigger smell during pregnancy!

I disliked it so much I had to throw it out. Even now, after pregnancy, I still don’t like that smell!

I can’t remember exactly how many weeks I was when I started vomiting, but I think around 10 or 11 weeks.

I remember that I would get nauseous in the morning as I got ready for work but no vomiting. Around lunchtime, I would throw up.

I was embarrassed at work because it was a small little office, and everyone could hear that I was throwing up.

What Were My Triggers?

Besides the Glade plug-in, I mentioned above,

I was also triggered by the food smell from the second-floor apartment.

(I live on the third floor)

I would have to run up the stairs trying not to breathe so that I wouldn’t have to throw up, and sometimes it worked, but most times it didn’t (lol).

Then I associated getting home from work with the strong smell of food from the second floor that even when it wasn’t there, it would cause me to get nauseous and vomit with or without the triggering smell.

Eventually, being nauseous and vomiting became part of my norm (I didn’t even stress it).

In the morning, while gagging, I got ready for work (lol). I didn’t even run to the bathroom because I knew when I would have to vomit and when I didn’t.

I still laugh about doing that!

Most mornings, I didn’t vomit, but I was fatigued, and most evenings, I was even more exhausted after work, and I would vomit.

How Long Did My Morning Sickness Last?

The morning sickness lasted until I was 19 weeks pregnant!

Yes, I was well into my second trimester.

Those weeks felt like the longest weeks of my life!

Morning sickness isn’t easy, but it will pass!

Relief will vary as well; one day, you’ll like sour candies; another day, it will be cold seltzer water or ginger tea.

But you will figure it out!

Think about the beautiful baby you are growing inside of you and take it one day at a time. 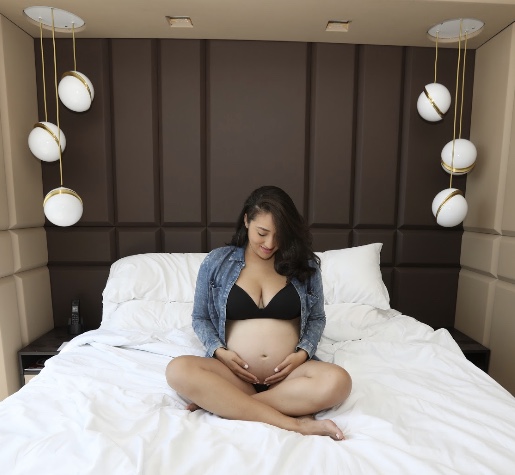 I'm 29 years. I am a first time mom to a beautiful baby girl name Scarlett. I am from the city that never sleeps (NYC). I never considered blogging until I became pregnant with Scarlett and realized how much the stories of other moms on their blogs helped me in more ways than they will ever know. I am truly grateful! Therefore, I decided that I too should share my motherhood journey. Although motherhood is different for every mama, it is also very similar. which allows us mama to support each other on this challenging yet beautiful journey called Motherhood.
END_OF_DOCUMENT_TOKEN_TO_BE_REPLACED

Back to top
22 shares